Give us a Call

Give us a Call

Maximising human performance by ensuring an efficient kinetic chain is the cornerstone of many rehabilitation and performance training programmes (Cook, 2003; Liemohn et al, 2001). The kinetic chain is made up of an integrated functional unit that constitutes the myofascial, articular, and neural systems (Cholewicki and McGill, 1996; Comerford and Mottram, 2001; Gibbons et al., 2001). Many experts believe that by ensuring optimal function of the core stabilising muscles the transfer of forces through the trunk will be more efficient (Cholewicki and McGill, 1996; Comerford and Mottram, 2001; Gibbons et al., 2001). The benefit of minimising intersegmental translation between vertebral bodies and keeping the spine in the ‘neutral zone’ as described by Punjabi (1992b) has two major benefits firstly, minimising potentially harmful forces through the spine and surrounding tissues and secondly, to allow a stable platform on which the upper and lower limbs can interact with the environment.

Clark (2000) described how dysfunction of the kinetic chain can lead to compensations and adaptations in the other systems which can potentiate tissue damage. He described the concept of ‘synergistc dominance’ which is where one or more of the synergists take over the role of the prime mover. For example if gluteus maximus was weak then the erector spinae and hamstring muscles compensate to maintain functional movements. This would result in increased compressive forces in the lumbar spine secondary to increased synergistic muscle activity without adequate stabilisation. The other concept that can influence the kinetic chain is ‘reciprocal inhibition’ (Clark, 2000). This relates to dysfunction of one muscle (e.g. tight iliopsoas) causing inhibition of the normal muscle activation patterns of the antagonistic muscles (gluteus maximus, transverse abdominus, internal oblique, multifidus and deep erector spinae). This influences the normal force coupling mechanism of the lumbar spine resulting in increased compressive and translational forces. It can be seen from these examples that when the mechanical efficiency of the system is decreased (i.e. core stability function), injury risk is increased (Cook, 2003). An anticipated outcome would also be a negative influence on some of the components of human performance. Surprisingly this concept appears to be more anecdotal than scientific. This current review of the evidence behind the concept that core stability can enhance human performance only found 2 intervention studies that directly investigated this purported concept (see Table 10). This was very surprising considering the vast amount of published material on this topic from non-analytical sources (Boyle, 2004; Cook, 2003; Lawrence, 2003).

Performance has been defined by Battinelli (2000) as the, “increased synergistic patterning of proficiency and competency acquired through the conditioning and training of developed structural and functional capacities, abilities, and skills relative to nutrient and metabolic utilization that can be demonstrated during the execution of designated physical activities.” Simply, movement goals are the result of the interaction of these subsystems. Watson (1995) outlined that the two most important factors that influence human performance were genetics and environmental influences. He described some environmental factors as being ‘invairiable’ constraints that have a permanent influence on performance and others that can be modified or improved through training. Specific characeristics of variables that can be modified include strength, joint mobility, and the capacity for various types of physical work (endurance). It would appear from this definition that logic would suggest that core stability was a trainable variable that constitutes one of the elements of human performance. More research is necessary to confirm whether there is a direct correlation beteen improved core stability values and human performance. A possible relationship between core stability and human performance is depicted in Figure 1. This represents the combination of unique inate attributes of an individual and variables that can be influenced by external input. The figure highlights a chain of command for variables that determine human performance and from this one can deduce that testing methods used to determine the role of core stability in human performance would need to be very sensitive to highlight specific components of core stability involvement. Future research would need to be mindful of this point.

The study by Stanton et al. (2004) demonstrated that core stability values can improve from a specific core stability training programme and have no impact on other physical performance parameters such as running. This may be reinforcing the well established concept of specificity of training (Astrand and Rodahl, 1986) or that the intensity of the core stability programme was below the required threshold to influence the subjects in their study. This study needs to be expanded to consider a larger population and possibly a more functional core stability programme that was more akin to running than Swiss ball exercises. The concept of functional core stability training emphasises training movement patterns rather than isolated specific muscles (Boyle, 2004; Gambetta and Gray, 2002). Early indications suggest that this is the new direction that core stability training will take. The progression from very isolated controlled movements for single joint muscles to functional training programmes that introduce controlled amounts of instability that require an  individual to react to maintain their own stability would appear to be the current trend in practical application of core stability training (Boyle, 2004). Once again the organic growth of this branch of the core stability concept warrants investigation. It would appear that much of the drive for change and new development comes from the practical application and development of techniques by sports trainers, therefore science is constantly playing catch up to provide evidence post hoc.

From a mechanical engineering perspective it would appear obvious that by improving the mechanical efficiency of a machine that it would perform better. On reviewing the current available evidence of the human model there would appear to be a significant void of intervention studies and much of the performance based  core stability work is based on the application of theories rather than evidence. It would appear that the assumption cannot be made that by improving the function of the core stabilising muscles that it is possible to directly improve performance in an unrelated task such as jumping, running or swimming (Stanton et al., 2004). Anecdotal opinion strongly suggests that by improving core stability function the performance level of other functional tasks will be enhanced however the current evidence base is very small and there are many variables in this field that need to be investigated.

See Table 10 for intervention studies associated with this key question and Table 16, Appendix E for the evidence table used in the guideline development. 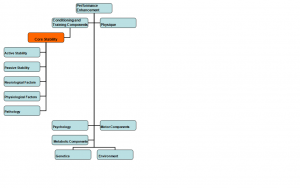